There is no chance to preserve a historic building once its gone.

Sadly, a great many of Strathcona County & Fort Saskatchewan's historic buildings are now lost and recognized only by plaques where they once stood. Thankfully, due to the tireless efforts of dedicated historians, some of these heritage sites still remain...and often, hidden within plain sight.

We enjoy a fascinating history, worth taking the time to explore it. Glaciers that created the terrific knob & kettle terrain; the First People; the North-West Mounted Police; and the European homesteaders...each have left their mark here. You just need to know where to go look.

Alberta has over 13,000 years of history and for most of that time, there is no written history. Strathcona County notes on their website that over 370 archaeological sites have been identified in the County, including many Cree and Métis sites! Archaeological sites are inventoried & managed by the Alberta Government. Read more.

The super cute little white church that stands adjacent to the 'new' church was built in 1910. "It was a re-build of the original, which was lost in a fire shortly after it was moved to that location.  The original church began it's life as the Fairmount Methodist Church in the country and eventually was moved onto the town-site. It took a team of 12 horses and sleighs to pull the Church.  In 1915 an addition was built on to the church to house the student ministers while they were serving the local area." - History of Ardrossan United Church, Ruth Dewitt. Read more. 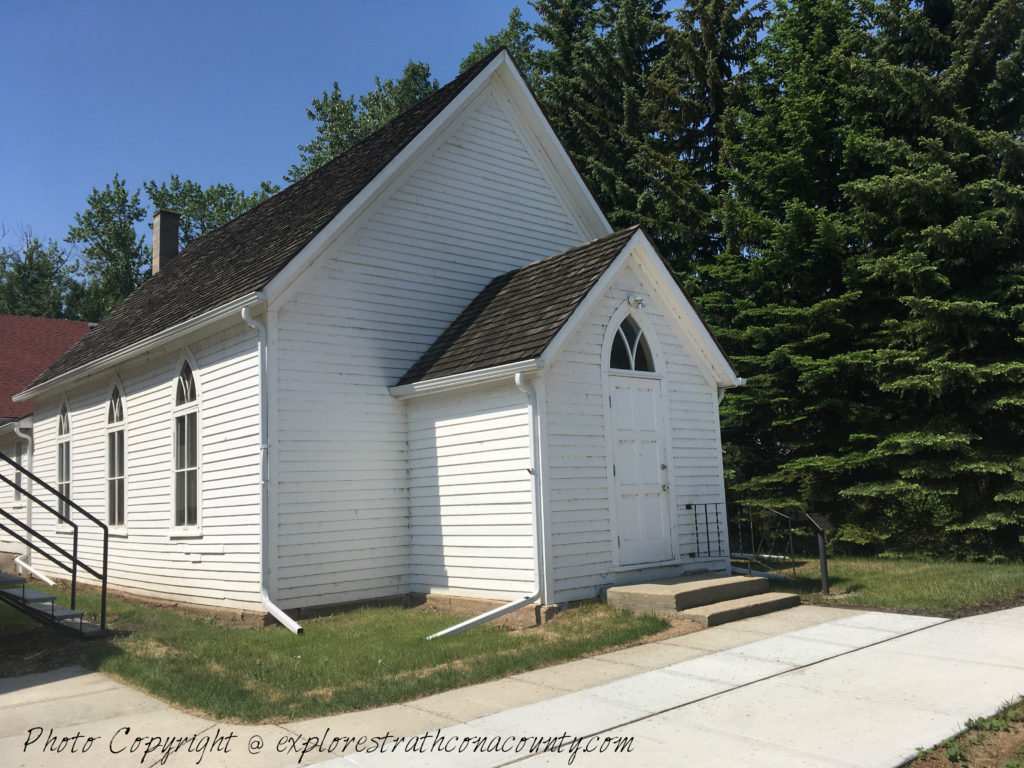 The original church was built 1905 on land obtained by a land grant of 40 acres from the Dominion Land Office. A new church was built in 1945 and the plaque noting the historical significance of the site is located on the left hand side of the church entrance. Read more.

Located in rural Strathcona County, the house, also known as Bremner Manor, was built about 1912 and it is recognized as a Municipal Historic Resource in the Alberta Register of Historic Places - read more. The County is hoping to develop the entire site into a heritage village and is opened periodically for special events. 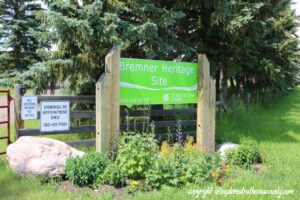 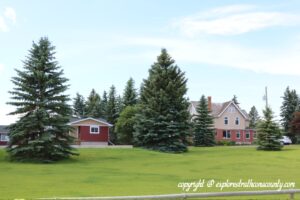 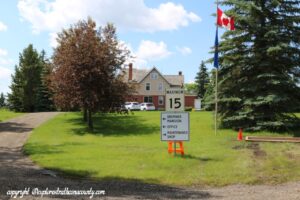 Fire protection area circa 1900 and a stopping point along the Old Edmonton Trail, the primary route from North Cooking Lake to Edmonton. Deer Mound is the second highest elevation in Strathcona County, giving a view of the land from Tofield to Fort Saskatchewan. Settlers would often set fires to clear land and in the years 1894 - 1895, much of the area from Cooking Lake to Fort Saskatchewan could be seen on fire. In 1895, the Dominion Government set aside 440 square km of forest for protection and appointed the first forest ranger. A wooden lookout tower was built about 1900 and was replaced by a steel tower in the 1940's. The station was marked by a Geodetic Survey of Canada bronze tablet and a plaque was installed to commemorate its historical significance. Strathcona County's off leash dog park now runs through the natural area.

Good Hope is a historical spot in Strathcona County, one of the original communities to be settled by homesteaders arriving from Eastern Canada, about 1892. There were discussions about the name of the new district, and the name "Good Hope" won by a small margin over "Sunny Slope", according to the Strathcona County Heritage Foundation. Originally, both Presbyterian and Methodist services were held in the old log school at Good Hope. When that structure burned down in 1909, a new school was built 1/2 mile south. It remained in use for about 40 years and now serves the community as the Good Hope Community Hall.

The community church was built in 1911, it later amalgamated with Partridge Hill and even later became Good Hope Standard Church. The church had regular services until the 1970's, but is now used only for special occasions.

Built 1891, by Jeremy Gladue, one of the original Metis settlers on Hastings Lake. He gifted the house to his daughter, Margaret ("Maggie") and her husband, John Tough, a Scottish railway man, when they married. The hill that the house resides on overlooks Hastings Lake and the property became known as Maggie's Hill. Maggie & John raised nine children in the 600 square foot loghouse. The house is one of the oldest homes remaining in Strathcona County and has been beautifully restored. It is now a bed & breakfast and the owners seem intent on preserving and honouring the historic character of the house. Find them on Facebook.

The area used to be a hotbed of activity, a very popular summer resort area. Mrs. McMenomy opened a general store in 1910, then a post office and finally a hotel in 1914. She remained there until her retirement in 1956. The store remained opened until 1991, the post office until 2005. The hotel has now been refurbished and serves as a private residence.

Craftsman style bungalow, built about 1910 in the hamlet of South Cooking Lake. Originally built as a vacation home, it is now a private residence. It is recognized as a Municipal Historic Resource in the Alberta Register of Historic Places - read more.

Heritage Mile is a series of heritage sites in Sherwood Park that extends from the traffic circle to Baseline Road. Most of them pre-date Sherwood Park. Start at Smeltzer House where they have a map and more detailed historical descriptions of each place.

This was the primary transportation route from Cooking Lake to Edmonton in the early 1900's and can be found on regional maps as early as 1894. Located in the heart of the Sherwood Park Natural Area, you won't find this spot in any guidebook. The Strathcona County Heritage Foundation doesn't even list it in its directory of historic sites, but it's a neat little stop if you enjoy a walk through nature to get there. Land transportation was a very different story for our pioneers and sitting quietly in this heavily forested spot, it becomes easier to imagine what it might have been like. Read more in Parks, Nature & Trails. 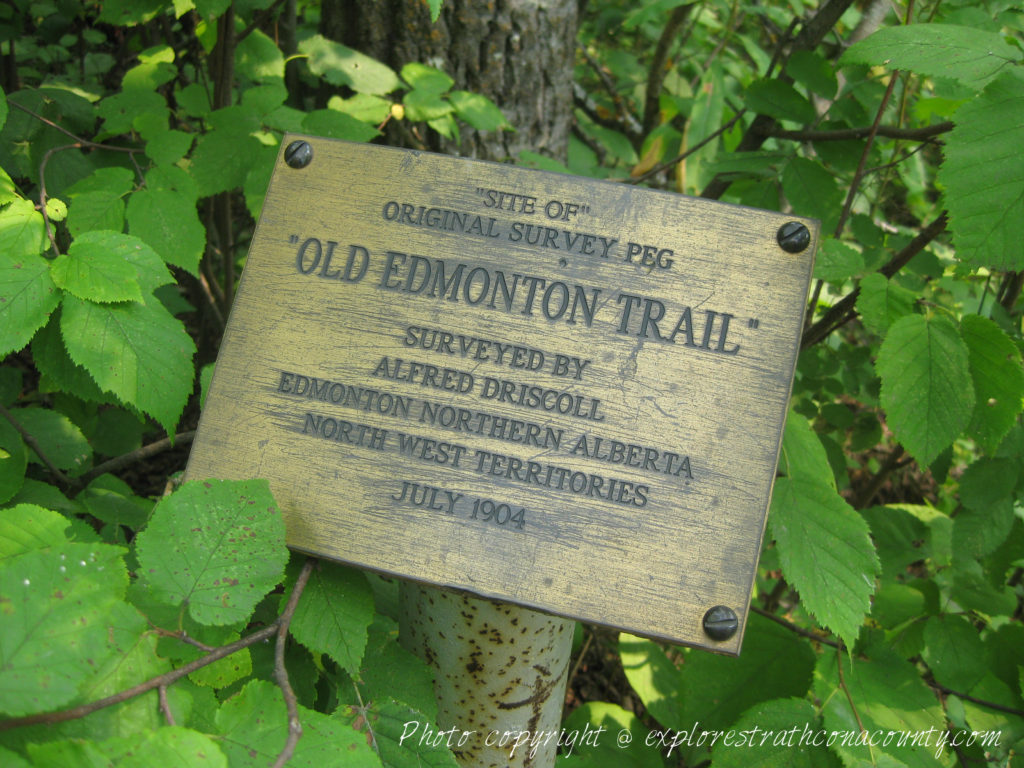 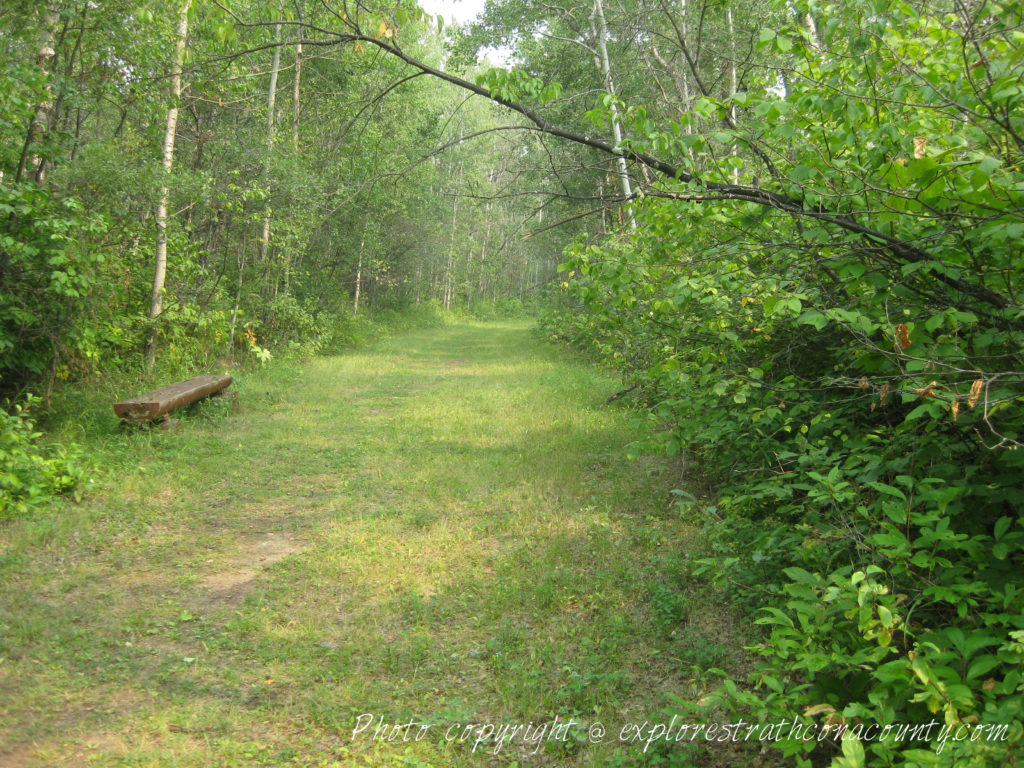 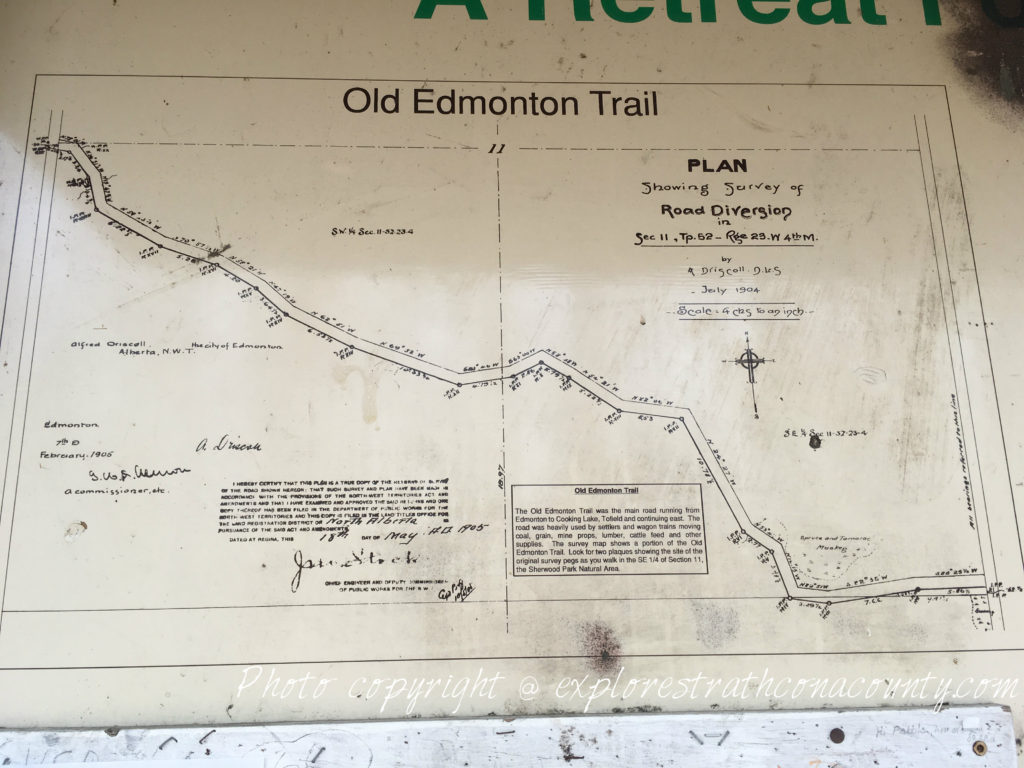 One of the earliest mission churches in the Catholic Archdiocese of Edmonton, St. Marguerite (later known as St. Margaret's) was established in 1912 and virtually abandoned in 1952. Poor access and a declining local population led to the Church being used less and less. Its cemetery and amazing historic value inspired some forward thinking individuals to preserve this place.

Located on the shore of Hastings Lake, this is a really interesting and very peaceful site, also an important Metis Heritage Site. The Metis Nation holds a commemorative mass at the Church every year. 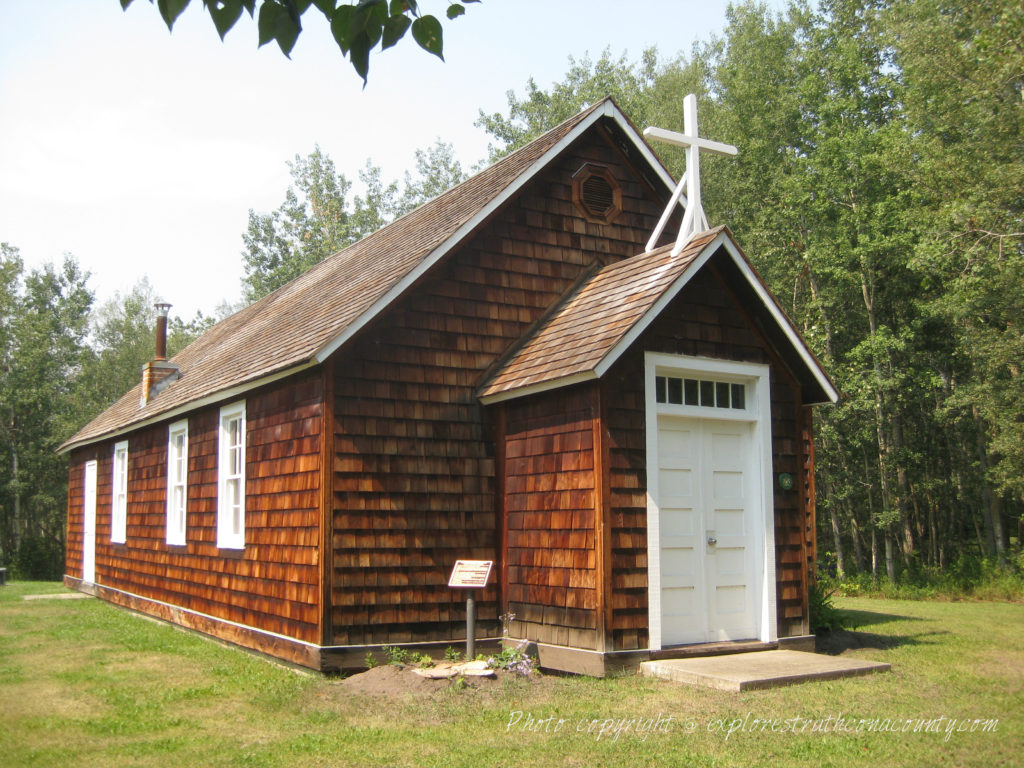 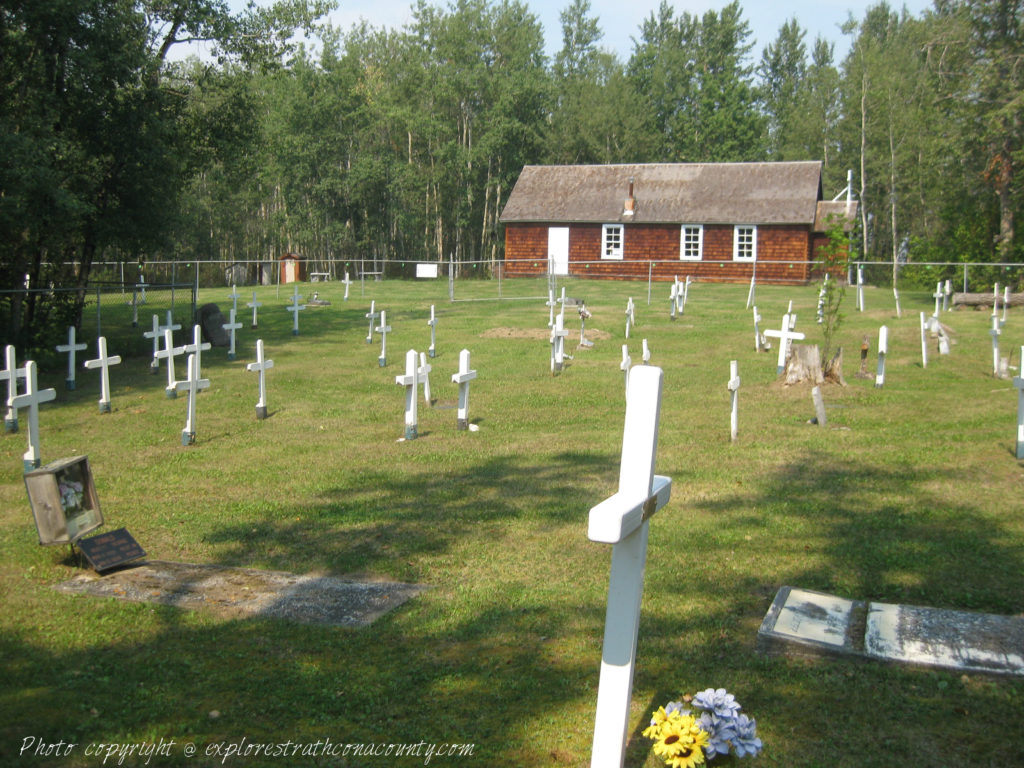 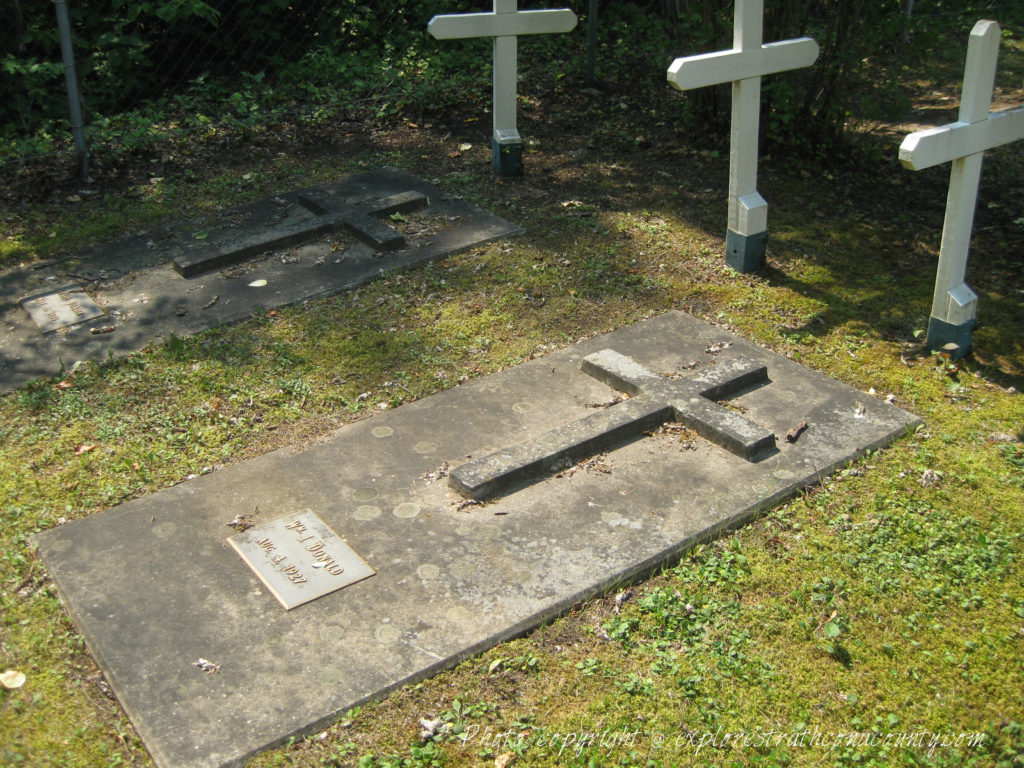 Featuring two historic barns in rural Strathcona County, one built circa 1928 and the other in 1953. It is a private residence and recognized as a Municipal Historic Resource in the Alberta Register of Historic Places. Read more.

In all of us there is a hunger, to know our heritage...to know who we are and where we come from. - Alex Haley

All photos are copyright @ explorestrathconacounty.com or have been used with permission. Please get in touch for purchase or permission to use.